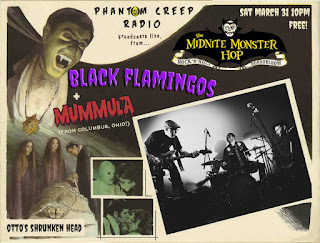 It’s time to Hang Ten…or more, if ya got ‘em. The sinister summer is in its dying months, but like a fiend possessed, it won’t go quietly. Instead, we surf, surf, surf against the dying of the light, reveling in the last screams of the sunny season before October rolls in to reign supreme. While our hearts are full of darkness and our bellies full of blood, we still can bob around and enjoy a day at the beach. After all, if the Creature from the Black Lagoon can hit up the waves, why not you?

Ahead of the Asbury Park Surf Music Festival, featuring SATAN’S PILGRIMS, THE MADEIRA, and more, take a trip in the BUCKET O’ BLOOD back to when BLACK FLAMINGOS played the MIDNIGHT MONSTER HOP. Grab your board, or use a spare coffin lid, to surf the sewers alongside radioactive rats and glow-in-the-dark superalligators. You might run into a C.H.U.D. or three, but don’t fret. They’re all headed to OTTO’S SHRUNKEN HEAD to party at the MIDNITE MONSTER HOP!

THE MIGHTY MOLOCH, DJ GREG-GORY and STRANGE JASON are on hand to creep about and make sure no one drowns in their drink (and if they do, they make their way home in an Uber…or a hearse.) In between the zombies and the scorpion bowls, the PHANTOM CREEPS will spin some moldy golden oldies that are sure to send you down a whirlpool of madness and mayhem. Rock and roll will take a bite out of your soul like one of the Deep Ones. So don’t get too Insmouthy. Instead, fill your mouth with something sweet while you fill your ears with PHANTOM CREEP RADIO.

Don’t get too frightened if we huff and we puff. The real wolves will be outside your door on August 25, 2018. THE BIG BAD will made their Midnight Monster Hop debut, along with Cheap Sneakers! It’s all going down at Otto’s, so don’t you dare miss it!

DOWNLOAD PHANTOM CREEP RADIO #31
Posted by Strange Jason at 12:00 AM No comments: