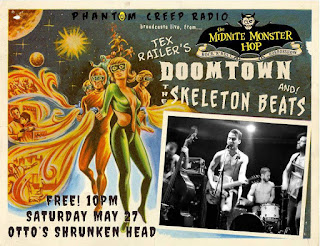 …it’s….it’s….it’s ALIVE! IT’S ALIVE! PHANTOM CREEP RADIO has clawed its way out from the dirt, through the rotted casket lid and into your ears. The frequency of fright sounds so right. The radio-active program from the MIDNITE MONSTER HOP at OTTO’S SHRUNKEN HEAD is back from the dead. THE MIGHTY MOLOCH has risen from his dirt nap, and he’s looking paler than ever before! He’s joined by the man with the X-Ray Eyes, DJ GREG-GORY and your friendly neighborhood gravedigger, STRANGE JASON, for a night of splatter platters that really matter.

All aboard, because it’s time to take the one-way trip to the end of the line. TEX RAILER’S DOOMTOWN is live and undead in the back of Otto’s Shrunken Head, so join the psycho-Americana twang punks as they give you a performance to die for! Punch your ticket, grab a drink from the bar car, and get ready to go all the way!

Before you reach your final destination, stop by Otto’s on January 27 for the annual LUX LIVES celebration! It’s a night celebrating the life and legacy of Lux Interior of THE CRAMPS. In addition to the sounds of THE PRIMITIVE FINKS and THE TARANTULA BROTHERS making you want to down some bop pills and do the ultra-twist, the Phantom Creeps will hold their yearly art auction. All proceeds go to Best Friends Animal Society in Lux’s name! Click here for all the details.

DOWNLOAD PHANTOM CREEP RADIO #25
Posted by Strange Jason at 12:00 AM No comments: